The illegal disposal of hazardous waste in America occurs on a regular basis and can have far-reaching negative environmental and health implications.

Toxic waste is the byproduct of a wide range of activities including manufacturing, construction, farming and other industries. It can also come from households, although often in much smaller quantities, from items such as batteries, paints and pesticides. If not disposed of properly, toxins can seep into the environment and are ultimately absorbed by humans and wildlife.

The federal Environment Protection Agency (EPA) is responsible for overseeing the correct disposal of these potentially harmful materials which should be done through a local hazardous waste service but that isn’t always the case. In the past five years alone, the EPA has issued fines to businesses that have broken the law, totalling billions of dollars. But, which state is the worst offender?  To find out, we have analysed the EPA’s enforcement and compliance data over the past five years to reveal the states with the worst hazardous waste disposal violations. 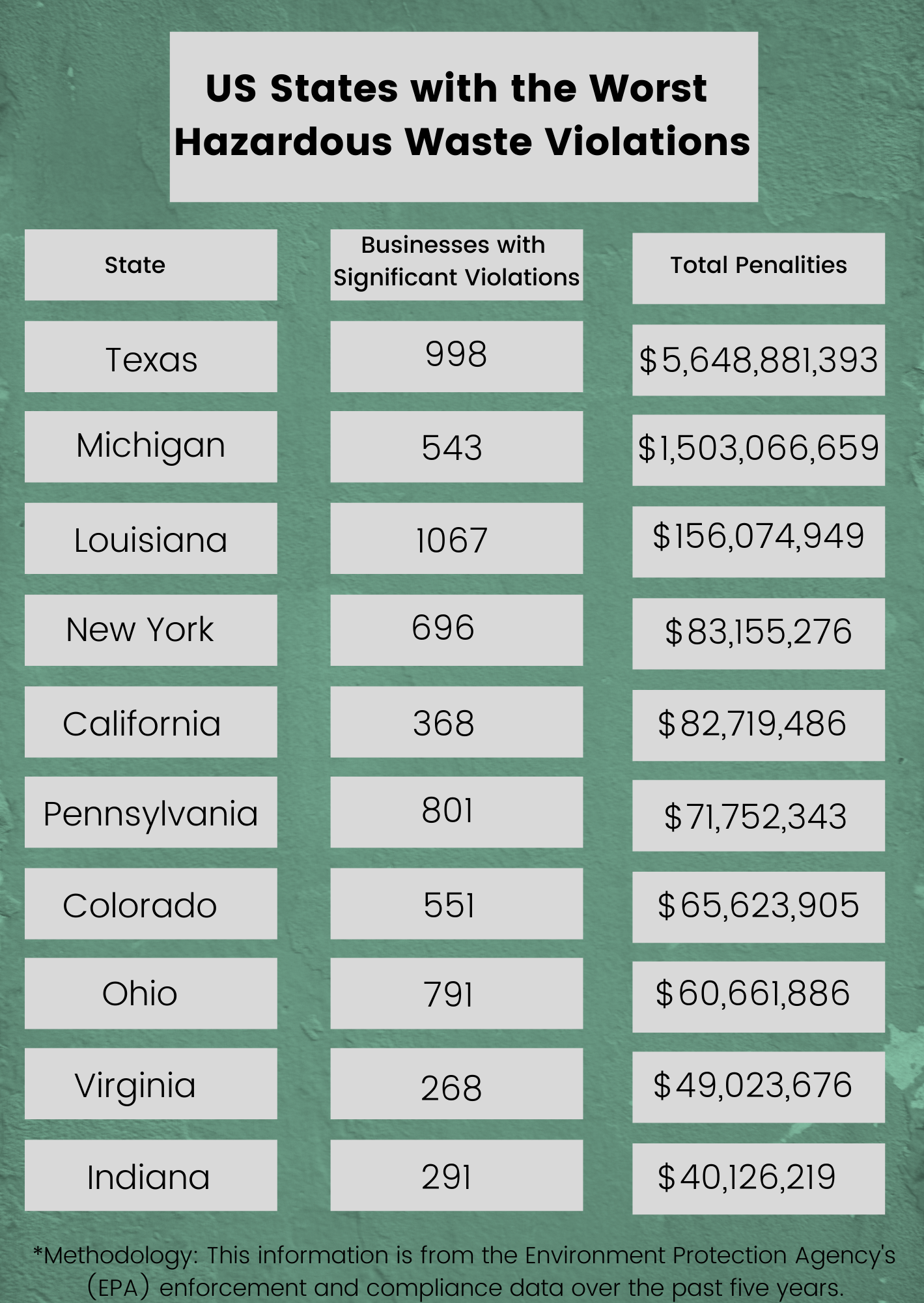 As America’s petrochemical powerhouse, it may come as no surprise that Texas tops our list with a huge $5,648,881,393 in fines issued for incorrect disposal of hazardous waste over the past 5 years. In fact, there has been much public outrage from residents who say Texas is the nation’s hazardous waste dumping ground. At the time of writing, there are 4,108 facilities with current violations. When it comes to the clean-up, you’re in luck: You’ve actually got your hands on some of the most easy-care drinkware out there.

Coming in second place is the country’s automotive capital, Michigan. With $1,503,066,659 in fines issued over the past 5 years for the incorrect disposal of hazardous waste, it’s safe to say that Michigan has a long way to go when it comes to improving how they deal with waste. Oakland was the county with the highest number of fines totalling $268,400. There have been several high profile cases of illegal hazardous waste disposal in the state, with one business owner sentenced to prison for his crime in 2019.

With 37893 facilities that have had violations, Louisiana has been issued $156,074,949 in fines since March 2016. Whilst this is significantly lower than the top two offending states, Louisiana has come under fire in recent years for allowing residents to live near toxic waste sites. In fact, a toxic landfill site at Gordon Plaza in Louisiana is notoriously polluted and often referred to as ‘Cancer Alley’.

Somewhat surprisingly, the Big Apple comes in at number 4, with $83,155,276 in fines due to illegal toxic waste disposal. With 51127 facilities, New York has a relatively high number of sites that have come under fire in the past 5 years. The worst offending county was Niagara, located in the northwest corner of the state, totalling $2,418,199 in fines.

California may be known for its sustainability and forward-thinking, however, when it comes to illegal hazardous waste disposal, the state has a long way to go. In fact, toxic waste has even been discovered off LA’s coastline. With $82,719,486 in fines, this West Coast state is very similar to New York in terms of the amount facilities have been penalised for.

Pennsylvania comes in at number 6 in terms of the amount owed in fines due to dodgy toxic waste disposal. With landfills nearing capacity, the state has had to take serious action to reduce the amount of waste, including hazardous waste, filling up sites. Over the past 3 years, there have been 801 facilities with significant violations.

Colorado is full of stunning landscapes, incredible mountains and flowing wild rivers. However, they also have a toxic waste problem that is costing $65,623,905 over the past 5 years. In 2017, state health officials revealed Colorado landfills had been illegally burying low-level radioactive waste from the oil and gas industry that they were not approved to handle.

Coming in 8th, Ohio has 3329 offending facilities, which makes up a high proportion comparatively. In 2021, Ohio received a hazardous waste rating of D+, which is only one notch above the lowest rating of D indicating it has a long way to go in cleaning up its act. The report said the state had over 9,000 potentially contaminated sites. In more positive news, a formerly polluted park at Hines Hill in the state’s northeast has been recently restored after operating as a waste disposal facility from the 1940s-80s - a time when dumps were largely unregulated.

“Almost heaven, West Virginia”, perhaps not when it comes to toxic waste disposal. The stunning state has trouble when it comes to hazardous waste, with $49,023,676 in fines being issued in the past 5 years. Arlington County was the worst offending area, followed by Chesterfield and Warren Counties.

With $40,126,219 in fines being given out for illegal hazardous waste disposal in the past 5 years, the state of Indiana rounds out our list. Indiana is frequently ranked among the most polluted states in the country and, according to the EPA's Toxics Release Inventory, Indiana releases more chemicals and pollutants per square mile compared to any other state.

No Time to Waste

There are many negative effects of hazardous waste on human health and the environment so it’s important both businesses and households take steps in reducing this impact. While improper disposal of hazardous materials may not be felt immediately, they have the potential to contaminate the world in which we live over time. At home, it’s important to follow any instructions for use and storage provided on product labels and check with your local environmental agency for more information on management options in your area. Ultimately, we all want to protect the world we live in to ensure it can be enjoyed for many generations to come.

If you want to read more about the states with some great eco-friendly initiatives, we have ranked the top 5 and the results may surprise you. Or, if you have any questions about the disposal of non-hazardous household items we have created a handy guide to help you know which bin to throw it in.